Guided tours in and around Wageningen

Gilde Wageningen organizes guided walks in and around Wageningen.

Groups can subscribe throughout the year.
Costs: € 3,- p.p., with a minimum of € 25,- per group; accompanied children up to 12 years free.
Information: please contact us via e-mail

History of Wageningen, A short history

There are traces of an early medieval settlement on the mountain (Wageningse Berg). Presumably people first settled in the foothills of the Western-Veluwe

massif in the 12th century.
The defence works were modernized early in the 17th century, when the double moat became one single and wider moat. The walls were strengthened by martial ramparts in six places.
Towards the end of the 17th century members of the influential Torck family were responsible for numerous changes in and around the castle.
Lubbert Adolf Torck (1687-1758), burgomaster of Wageningen and squire of Rosendael, also ordered the construction of three major (and luxurious) buildings with apartments for rent. Two of these are still existant, the most important one being the former administrative centre of the Wageningen University. It now forms the nucleus of the prestigious new housing development built by the well-known Belgian architect Charles Vandenhove.

For some tours (group reservations) there are guides available speaking English, German, French or Spanish. 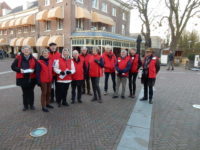